There’s a basic problem to running a restaurant in a 75-acre park.  Especially when it flanks one of Calgary’s most popular outdoor skating haunts.

How to keep the wind off your customers every time someone whooshes in with their gear?

Solution:  the glass-and-metal vestibule installed at Seasons of Bowness Park.  It’s a simple but stylish affair of irregularly-sized panels that frames this new casual fine dining restaurant with a watery effect akin to the light playing off Bowness lagoon.

But when I sit down with Alex Solano, one of the operators of  Seasons (as well as two Salt and Pepper locations and Lolita’s Lounge in Inglewood), I learn there’s more to this portico than meets the eye. 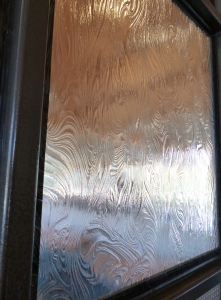 It’s pieced of ten historic styles of glass – some wavy, some bubbly, some seemingly dripping with movement – that each derive from a different decade of the park’s 100-year heritage.  It’s a silent tribute to the park’s storied past of campsites and swimming pools , teahouses and trolleys, dancehalls and midway rides – and to the stories of generations of Calgarians who have skated, strolled and played under the poplars.

“I wanted the vestibule to make you stop and think,” says Alex.  “To take a small [subconscious] pause and say: ‘Oh, actually this is really nice.  I’m now somewhere else’.”  A somewhere else he hopes that’s peaceful and neighbourly, where people can savour food and good conversation along with the view.

A place where the servers are quick to recognize that the couple at Table 12 want a little privacy, the solo diner devouring Road Trip Rwanda along with her arancini needs her glass topped up without interruption, and the pair by the window crave an ear with which to share the thrill of their grandson’s first steps.  Or perhaps bemoan the emigration of their daughter to Toronto for want of a local job.

Now almost five months into its rise from the Flood of 2013, Seasons is gearing up for the winter season with a new menu focusing on warm, comfort foods.  Think bubbling chicken pot pie.  Fresh Alberta Arctic grayling reminiscent of fishing trips with your dad. And an apple-ring confection that looks and smells like mini-doughnuts on a pillow of sweet cream.

With the ice scheduled to be ready this weekend,  there’ll be coffee-and-Bailey’s on the deck for the skating crowd; hot chocolate, of course, for the alcohol-disinclined.  Weekends will continue to bustle with brunchers, and the gas fireplaces on the new plaza will light up to warm frigid hands and feet.

Look for special date-night events by Valentine’s Day:  how about a cocktail/appetizer interlude, followed by a moonlit skate while servers prepare your table for a cozy fondue? 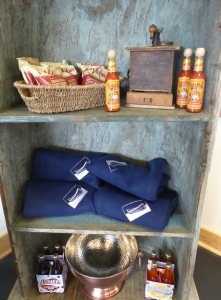 If seasonal shopping is more front-of-mind for you these days, head next door to the Market grab-and-go counter.  While the barista pulls your latte, scan the small-but-growing collection of retail items, including Chilewich runners and placemats, and soft navy throws featuring Seasons’ retro-cool canoe logo.  And bring home a few shortcuts for your holiday entertaining, like house-made bone-broth, pumpkin hummus, and fresh tomato salsa.

2016 showed us that Bowness Park is back again to thread through the warp of our urban lives.  It’s worthy of a pause – don’t you think? – to appreciate Seasons’ glass century passage next time the wind blows you in.

Seasons of Bowness Park and Market are open daily, including Christmas and New Year’s.  Check their Facebook page for hours.

Text and photos © 2016 Catherine Van Brunschot (except where noted)

One thought on “Comfort & Joy at Seasons of Bowness Park”