Fifteen years ago today – on October 12, 2002 – a bomb ripped through a crowd in Bali, Indonesia. Three bombs, in fact:  the first, inside a small, busy pub in the chock-a-block tourist district of Kuta; the second, across the street, outside a nightclub where revelers gathered to celebrate their participation in a rugby tournament; the third, near the Australian and U.S. consulates – underlining this clear message from Al-Qaeda that their war on Western “infidels” continued.  As wooden structures blazed and thatched roofs fell, hundreds fled through the flaming corridors and alleyways.  When the smoke cleared, 202 people were dead.

I lived in the country’s capital, Jakarta, at the time.  Was one of the Western “infidels” who made the emergency phone-tree calls, alerting other parents to the closure of our international school.  Listened to them react: first to the attack on beautiful Bali, more often than not their planned destination for the upcoming school break; then to the crater that now existed in the street where they and their families, too, might have walked.

I watched staff and students mourn the death of Jamie Wellington – a popular math and phys.ed. teacher, avid rugby player/coach, husband to a school counsellor, and father to two toddlers.  I attended the funeral of fellow Canadian, Mervyn Popadynec, and listened to young widows of other rugby players speak about what they had lost that day.

Meanwhile, hundreds of other funerals took place in Australia, Indonesia, and 20 other nations – and 209 people returned home from Bali with injuries sustained in the bombing, including burns and amputations.

Bombings targeting foreigners continued in Jakarta and Bali – in 2003, 2004, 2005, and 2009.  Hotels and malls responded with blast walls and bomb-detectors; international schools became armed fortresses; tourists and expats (like us) left the country in droves.  Terrorists were caught, brought to trial, executed.

Two years after the initial Bali bombing, a memorial to those who died there was opened by the Indonesian government on the site of the former pub.  Photos showed it to be a small, tasteful plaza, featuring a lotus-shaped fountain and a tall stone carving of a Balinese kayonan depicting the tree of life.

Now, quieter times have returned to Bali and so, too, have the tourists. I was one of them last month, and together with my husband, made my way for the first time to the Bali Bombing Memorial. 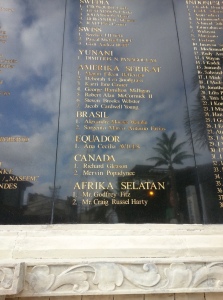 All 202 names are etched in black marble there beneath the tree of life, divided by country of citizenship.  We searched for the names that we knew; shed a few tears for their loss – and for the loss, too, of our own naivety.  The 88 fatalities listed below Australia reminded us again of the enormity of that country’s bereavement.  The 38 Indonesian names detailed the cost to those who dared to work or fraternize with “infidels”.

We were not alone in the plaza.  Tourists paused to peruse the names, to take pictures; others with their own personal memories of that day leaned into one another, brushing fingers across the gold letters that represented a life.  While we lingered on the street scanning the new shops and the bumper-to-bumper traffic, visitors continued to come, in clumps of two, four, eight.  I was amazed at the numbers, given the 15 years that have passed.

And I wondered how many lives still bear scars of this day:  family, friends, co-workers, acquaintances of the 202 dead, of the 209 injured.  And the friends who, in turn, supported these survivors in their pain and loss.

From this one attack on this one day.

In a world where bomb blasts occur almost every day, in countries all over the globe.

I stopped doing the math.

AND FOR INDIVIDUALS EVERYWHERE WHOSE LIVES HAVE BEEN LOST THROUGH TERRORISM AND WAR.

STRENGTH TO THOSE WHO LOVED THEM.